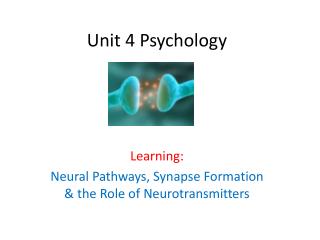 psychology – unit 2 - . states of consciousness. “i had an extremely strange dream last night,” linda said as she,

Psychology Per. 4 - Elias bonilla. psychology per. 4. a somatoform disorder in which a person interprets normal physical

Unit 4: Clinical Psychology - . 4.4: issues &amp; debates the contribution of psychology to society from the 5 as

Psychology Unit 3 - . question # 1 what is psychology? psychology is the study of human behavior. psychology comes from

Unit 4 Psychology - . plasticity of the brain. brain plasticity. the brain’s ability to reorganise and relocate neural