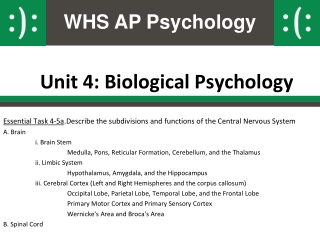 A.P. Psychology The Biological Bases of Behavior - . evolutionary psychology. the theory of evolution. perhaps the single

Unit 1: Approaches to Psychology - . introduction: the science of psychology . unit overview. pretest what is psychology?

Psychology 30 - . welcome!. unit 1: what is developmental psych?. this unit serves as the basis upon which all of the

BIOLOGICAL PSYCHOLOGY - . biological psychologists focus their study on the human nervous system and how it affects