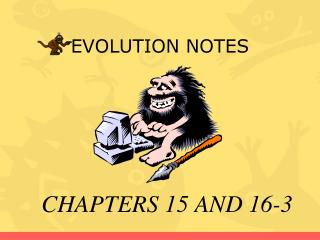 EVOLUTION NOTES. CHAPTERS 15 AND 16-3. WHAT IS EVOLUTION?. Evolution, or change over time , is the process by which modern organisms have descended from ancient organisms. . EVIDENCE OF CHANGE IN SPECIES. -fossils -DNA sequences -anatomical similarities (body structures)