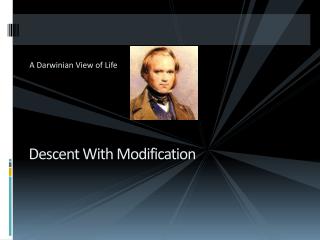 Descent With Modification. A Darwinian View of Life. The Theory of Evolution by Natural Selection. Charles Darwin, reluctant revolutionary, profoundly altered our view of the natural world and our place in it. Soft constraint processing - These slides are provided as a teaching support for the community. they can be freely

Spring 2008 - . bias, confounding, and effect modification stat 6395. filardo and ng. bias. any systematic error in the

Prakriti - Complete Basic Constitution of the Body - Http://www.planetayurveda.com in ayurveda, prakriti or nature of

Chapter 22: Descent with Modification - A Darwinian View of Life - . essential knowledge. 1.a.1 – natural selection is

Chapter 15 Principles of Evolution - . summary of darwin’s observations and conclusions. what is evolution?. the