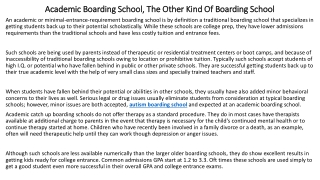 Autism covers such a wide spectrum of symptoms it can be can be difficult to pinpoint which school might be best for your child. ASD (Autistic Spectrum Disorder) can range from Mild to Severe with symptoms ranging from the child not being responsive to high functioning. Boarding the BUS - . spe 518 amy marino. boarding the bus. walk to the school bus. find the door of the bus by trailing

Lumbini Boarding School - Phone no:-071546032. lumbini boarding school. a place for the holistic development of child.

Boarding School In Noida - Jbm global school is one of the leading boarding schools in noida, we have skilled teacher who

REVIEW HERE THE TOP FIVE BEST BOARDING SCHOOL FOR GIRLS IN INDIA - Located in dehradun, ecole globale is one of the best