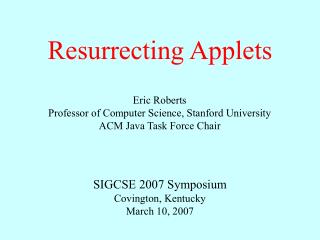 MCSE Guide to Microsoft Windows 7 - . chapter 3 using the system utilities. objectives. understand and use the control

Events in JAVA - . needed for applets and gui based programs. applet uses gui to interact with user. most of the events

Chapter 14: Applets and More - . starting out with java: from control structures through objects fifth edition by tony

The Applet Class - . applets are small applications that are accessed on an internet server, transported over the