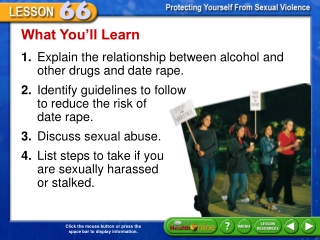 What You’ll Learn. 1. Explain the relationship between alcohol and other drugs and date rape. 2. Identify guidelines to follow to reduce the risk of date rape. 3. Discuss sexual abuse. 4. List steps to take if you are sexually harassed or stalked. What You’ll Learn.