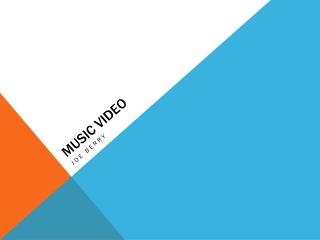 Music video. Joe Berry. My group. I am working on my music video with Conor C rawford. We have also chose the song which will do which is Pentatonix - Cant hold us. They have done a cover to a song but the way they have changed the song has made it fit with what we want to do. Music Video - . joel hillyard &amp; chris lawry. our music video will be on the famous song. ‘should i stay or

Music Video - . by: joel hillyard &amp; chris lawry. our video. our music video is of the famous song. ‘should i

Music video - . definition . the definition of a music video is a short film or video that accompanies a piece of music.

MUSIC VIDEO - . what is the purpose of a music

Music Video - . presentation. definition. a music video is a short film or video that accompanies a piece of music. they

MUSIC VIDEO ANALYSIS - . bethany broughton. my chosen video . the style of this video, i think , is mainly a concept as