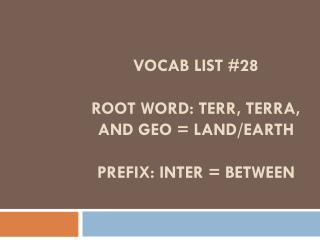 Vocab List #28 Root word: terr , terra, and geo = land/earth Prefix: inter = between. extraterrestrial. out of this world; above and beyond what is found on planet Earth. geode. a hollow stone found on the earth that is lined on the inside with crystals. geographer.

GRE-Vocab list 1 - Http://catking.in/ learn all the important words that will come for the upcoming gre examination.

Civics vocabulary - . civics vocab. how it’s going to work: vocab will be given in a list format broken down by unit.

SAT Vocab List 11 - . alibi. an excuse that shows someone was not at a crime scene noun. buttress. strengthen; support

Vocab List 10 : Catcher in the Rye - . 1. hemorrhage (n) - a widespread or uncontrolled loss of something (usually blood)

Into the Wild Vocab Author’s Notes-Ch.1 - . copy the definitions for these words in your notes. find the word in the

Vocab List 1: Miscellaneous SAT words you should know - . 1. brevity (n) - conciseness (gets to the point) in speech or

Vocab words - . write these definitions for next quiz on friday (matching). copy from bottom pages in tan boxes of orange

Prefix/Suffix Vocab. - Prefix/suffix vocab. by: chloe mcgee. auto- prefix. self or by itself. con- prefix. with or