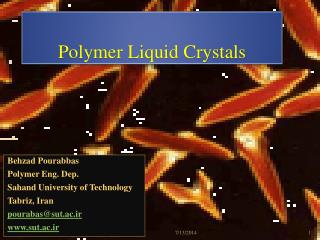 Safe Handling and Use of Liquid Nitrogen - . characteristics of nitrogen. 78% of atmosphere colorless, odorless,

Polymers - . utensils made from biodegradable plastic. what is a polymer?. a polymer is a large molecule (macromolecule)

Symmetry in crystals - . infinitely repeating lattices. an integral number of unit translations along any axis will

What are Quasicrystals? Prologue - . crystals can only exhibit certain symmetries in crystals, atoms or atomic clusters

Structures induced from polymer-membrane interactions: Monte Carlo simulations How much can we torture the axisymme

2.5. Side Chain Liquid Crystalline Polymers - . polymers with mesogens attached as side chains can exhibit liquid