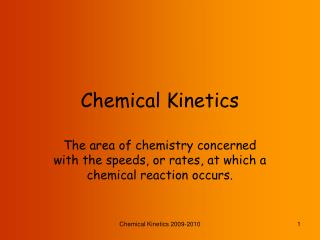 Chemical Kinetics. The area of chemistry concerned with the speeds, or rates, at which a chemical reaction occurs. Reaction Rate. The reaction rate is the change in the concentration of a reactant or a product with time, (M/s or M . s -1 ), where M is molarity and s represents seconds.

Chemical Kinetics - . how fast is it?. reptiles. what happens to your lizard if it gets cold? he hibernates. why?. the