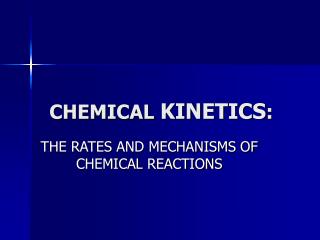 CHEMICAL KINETICS :. THE RATES AND MECHANISMS OF CHEMICAL REACTIONS. Chemical kinetics is the study of the speed or rate of a reaction under various conditions. Spontaneity is also important AND a spontaneous reaction does NOT imply a rapid reaction. Chapter 16 - . chemical kinetics 化學 動力學. outline. the rate of a reaction nature of the reactants concentrations