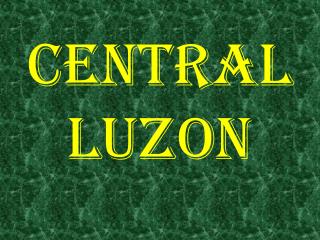 What is Project: Streamlining the Business Process of Critical Frontline Services Objectives - Scope of presentation.

Region I - . ilocos region. it is located in the nortwestern portion of luzon. it is bounded on the north by the babuyan

Central Luzon - . a wellspring of

REGION I The Ilocos and Pangasinan - . welcome. region i. situated on … the northwestern coast of luzon ; bounded by