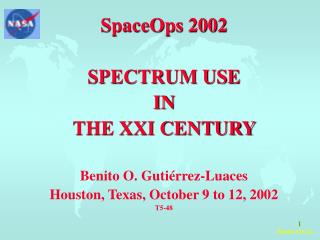 SpaceOps 2002 SPECTRUM USE IN THE XXI CENTURY Benito O. Guti é rrez-Luaces Houston, Texas, October 9 to 12, 2002 T5-48 AGENDA Basic parameters to be considered to achieve optimum use of the electromagnetic spectrum (EM) among all its potential users

INTRODUCTION - . cognitive radio (cr) is one of the new long term developments taking place and radio receiver and radio

Radio Receivers - . al penney vo1no. role of the receiver. the antenna must capture the radio wave. the desired frequency

2.9 : AM Receiver - . am demodulation is the reverse process of am modulation. a conventional double sideband am receiver