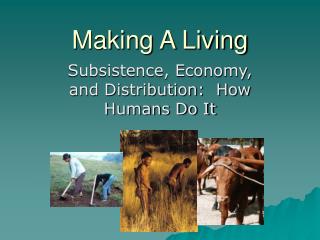 Making A Living Subsistence, Economy, and Distribution: How Humans Do It Economic Production as an Adaptive Strategy Food is necessary for survival; the means of subsistence of a given group has been called their adaptive strategy. living life of sobriety - Many people believe that the meaning of sobriety is the absence of alcohol intoxication. Unit 7 Making a Living - . pre-reading task. why does onetta think it worthwhile to work hard day after day? people need

MAKING A LIVING: GETTING FOOD - . foragers or gatherers and hunters. subsistence derived from a combination of gathering

Living a Healthy Life - . in this chapter, you will learn about… the concept of health and different ways to achieve

Living The Christ-Like Life! - . colossians 4:2-6. three exhortations on how to live the christ-like life:. devote