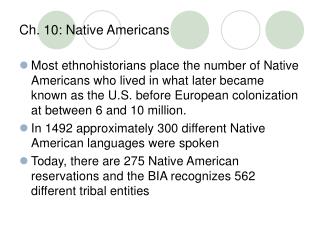 Ch. 10: Native Americans Most ethnohistorians place the number of Native Americans who lived in what later became known as the U.S. before European colonization at between 6 and 10 million. In 1492 approximately 300 different Native American languages were spoken

FALL SEMESTER 2012 Semester Exam Review - . why did the policy of treating the great plains as a huge indian reservation

Native Americans and Pioneers - . cultures in conflict. utah becomes part of the u.s.a. in 1846, the united states had

Warm-Up - . pretend you are the 1 st president of texas. your country has issues. for example: where to place the capital

US HISTORYYYYYYY - . i hope it makes sense...if not you have some major issues to deal with. . 1. native americans over

AP U.S. History Unit 8 - . american imperialism and involvement in world war i. focus while reading. clash between the

Native Plants - How to effectively use vegetation as a bmp presented by: jenna fahey and mary beth falsey dupage county