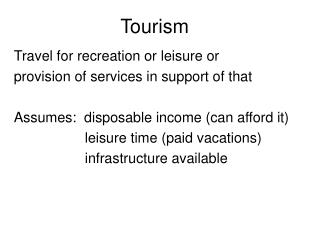 Tourism. Travel for recreation or leisure or provision of services in support of that Assumes: disposable income (can afford it) leisure time (paid vacations) infrastructure available. History of Tourism. Pilgrimages from Europe to the Holy Lands

TOURISM IN KARNATAKA - . version 1.0. tourism in

The Travel and Tourism Industry - . standard 1: objective 1. what is hospitality?. hospitality industry: businesses

TOURISM - . objectives. to identify the rationale for sustainable tourism development to discuss why tourism has increase

Tourism in France - . zoe catherine chung. the most popular destination in the world. tourism: 6% of the country's income