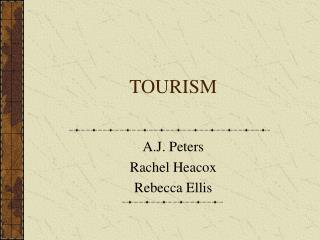 Tourism - . xue ji (zoe). tourists’ impact to ‘you’. pro: brings in money helps to promote the region to outsider

Tourism - . tourist attractions in wales. lesson aims. to learn the kinds of places which attract tourists. to learn how

Tourism - . …is the short-term circular migration of people to places outside their normal place of work or residence

Tourism - . tourism in romania. something about

Tourism - . travel for recreation or leisure or provision of services in support of that assumes: disposable income (can

Tourism - . introduction. hong kong's 18 districts are full of exciting events and attractions, colour and fun, which are

Tourism - Effective management strategies are the key to the continuing prosperity of tourist areas in the uk. mass