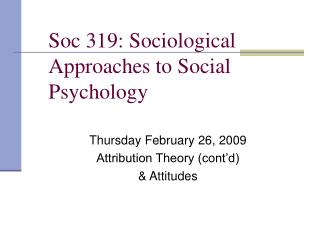 Soc 319: Sociological Approaches to Social Psychology - . tuesday january 20, 2009 what is social psychology?. what is

Unit 5: Social Psychology EQ 1 : What is conformity? - . br: explain an instance in which you behaved in a certain way

Psychology Of Attraction - . “love strikes when it’s not expected”. physical attractiveness. is the outside of the

Introduction to Sociology - . chapter 1, section 1. what is it?. sociology= studies human society and social behavior in

PS1012 &amp; PS1014 Approaches to Psychology Topics covered by John Beech - . these areas will be covered over 9