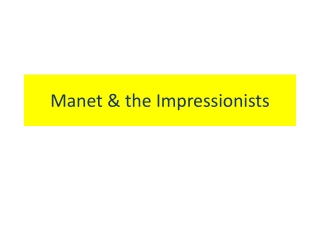 Manet & the Impressionists. Main objectives. Manet To paint ‘la vie moderne ’ or everyday modern life Wanted to change the institution of the Academie from the inside out. The Impressionists Also wanted to paint contemporary Parisian everyday scenes.