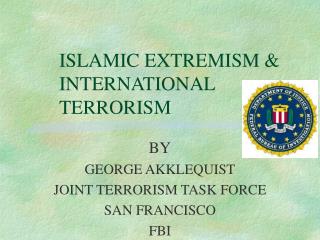 Harmful Intent: Organized Crime &amp; International Terrorism - . “and hate with them is limitless as love.”

Who Do We Think We Are? the curriculum dimension - . sir keith ajegbo. background: why community cohesion now?. 7/7 and

Terrorism in the Middle East - . background. modern islamic terrorism can be traced back to the 19 th century. many

The International Response to Terrorism - . lecture plan. definition of terrorism the interstate legal reaction to

Islamic Extremism and Terrorism - . al qaeda. al qaeda (arabic for “the base”) is a complex international islamist

What is terrorism? - . terrorism is a systematic way of using terror to get what you want. both israeli and palestinians

Current Issues Terrorism Policy: - . bell work review: what is an islamic fundamentalist? what are the different sects of