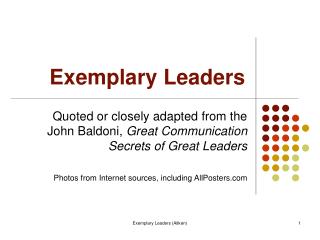 Exemplary Leaders. Quoted or closely adapted from the John Baldoni, Great Communication Secrets of Great Leaders Photos from Internet sources, including AllPosters.com . A & E Biography on Martha Stewart. Middle of video. What are five leadership characteristics of Martha Stewart?.

Exemplary Teacher Leaders - . multiliteracy healy, 2008, p. 203. …“the variety of literacies we use to communicate

Exemplary Chat Award! - . successful digital reference: it’s an achievement and a challenge!. purpose of the qa

Exemplary Chat Award! - . successful digital reference: it’s an achievement and a challenge!. purpose of the qa

Exemplary Middle Schools - . the new york state essential elements: schools to watch program – can it work for your

Exemplary Argumentative Essay - . as you write each paragraph, remember that each sentence has a specific “job” that

David Shulick: Exemplary Attorney - The law is a wide and varied field, containing so many aspects and categories that an