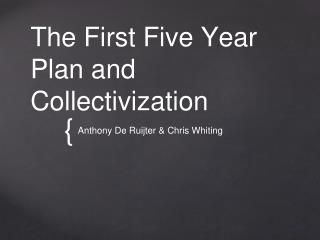 The First Five Year Plan and Collectivization. Anthony De Ruijter & Chris Whiting. The GMD left a legacy of Economic devastation behind for the CCP: Peasants had been taken away from the farms, depriving China’s economy of manpower.

Russia Under Stalin - . part ii: stalin’s rule. after stalin has risen to power…. how did the five year plans build

Totalitarianism - . totalitarianism. ideology set of beliefs by which people live their lives. applied on a national

Stalin and the USSR - . history 12 ms leslie. who to lead the ussr?. moderates - wanted to continue nep and slowly build

How successful were the Five-Year Plans? - . l/o – to evaluate the successes and failures of the five-year plans. the

The Soviet Union Under Stalin - . conditions in the soviet union . from 1918 -1923 endures the creation of a new

Content Strategy and Touchpoint Mapping (A Journey with the Brand) - Are you still creating “all-in-one” content? is