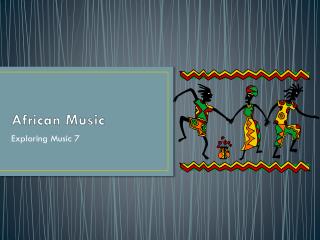 African Music . Exploring Music 7. Family Life. Families provide focus for community activities- singing, dancing, and music are important parts of family life Rural Lifestyle- Up at dawn, and return home for an evening meal when it gets dark

Koko: ‘Yiri’ - . african music in society. rich, colourful and diverse covers 50 different nations, each with their