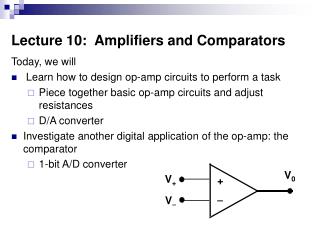 V 0. V +. +. . V . Lecture 10: Amplifiers and Comparators. Today, we will Learn how to design op-amp circuits to perform a task Piece together basic op-amp circuits and adjust resistances D/A converter Investigate another digital application of the op-amp: the comparator Lecture 4: Operational Amplifiers - What can you do with infinite gain? some history fairchild 0.60 inches 1964: the

Using Op Amps as Comparators - . by james bryant. view the notes as well as the slides of this powerpoint presentation.

Comparators and Buses - . what is it?. a comparator is circuitry that compares two inputs a and b, determining whether