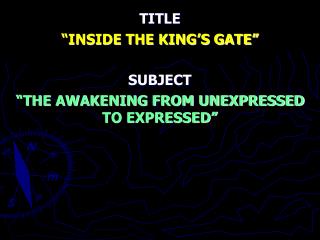 TITLE “INSIDE THE KING’S GATE” SUBJECT “THE AWAKENING FROM UNEXPRESSED TO EXPRESSED”. ESTHER 4:1 When Mordecai perceived all that was done, Mordecai rent his clothes, and put on sackcloth with ashes , and went out into the midst of the city, and cried with a loud and a bitter cry; 3-letter words - . name that color. which letter am i?. how many?. fruits and veggies. things in a classroom. type

Hair Raising Tales - . 10/04 bell ringer. choose the verb that agrees with the subject in the sentence. the king's horses

“Arresting Financial Fraud: The Inside Story From The FBI ” - The views expressed by the presenters do not

Pronouns - . pronouns. a pronoun takes the place of a noun . pronouns. subject pronouns. the subject does the action of a

Sing To The King - . sing to the king who is coming to reign. glory to jesus the lamb that was slain. life and salvation