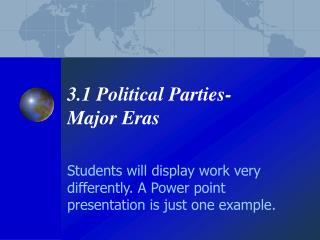 Objective - . 3-d scene. u ’. u. study the mathematical relations between corresponding image points.

APG Unit II Review - . 2013. what is the name for federal spending on local projects members of congress want in order to

Industrialization - . unit 9. i can. i dentify major eras and events in u.s. history such as the industrial revolution.