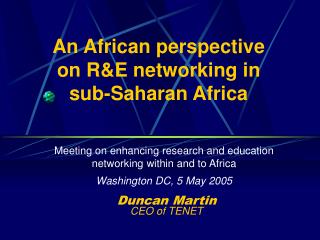 An African perspective on R&E networking in s ub-Saharan Africa. Meeting on e nhancing r esearch and e ducation n etworking within and to Africa Washington DC, 5 May 2005. Duncan Martin CEO of TENET. What’s meant by “Research and Education Networking”?. In the developed world: Political Ecology and Methodology - How are wildlife conservation and protected areas governed in sub-saharan africa? ...

AFRICA and its identity through KWANZAA - . kwanzaa is celebrated mainly in america by the african americans to honour