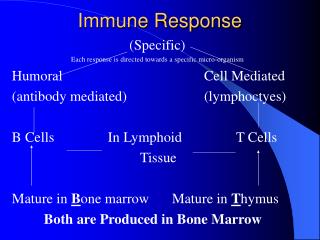 Immune Response. (Specific) Each response is directed towards a specific micro-organism Humoral Cell Mediated (antibody mediated) (lymphoctyes) B Cells In Lymphoid T Cells Tissue Mature in B one marrow Mature in T hymus Both are Produced in Bone Marrow. Antigens.

The Role of the Major Histocompatibility Complex in the Immune Response - . mhc &amp; immune response. molecules

Ch. 21. Cancer and the Immune System What is cancer? What is the immune response to cancer? - What are the prospects for

Immune Response - . vocabulary. immunology - the study of host defense mechanisms immunity - ability of the host to

Immune Response - . vocabulary. immunology - the study of host defense mechanisms immunity - ability of the host to

THE IMMUNE RESPONSE - . the first line of defense: skin and mucous membranes provide physical barriers that prevent most