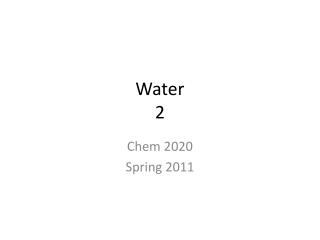 Chapter 2 : Water - . learning goals :. what kind of interactions occur between different type of molecules in water. why

2-2 Properties of Water - . federoff. the water molecule. water is one of the only few compounds that naturally occur as

GEEWIS Scenario #2: Water, Water, Everywhere...? - . peter and jeanette brown and their toddler, ralph, have a home along

Module 2: Water Management Unit 2: Water Framework Directive - . objective of this presentation. to give participants an

Chapter 2-2 Properties of Water - . why is earth called the blue planet. covered by water. water is unique because:. 1.

Water (H 2 O) - . why water exists and why is it important water’s unusual properties hydrogen bonding and polarity

Chapter 2 Fresh Water - . section 1: streams and rivers. 1. runoff water that flows over the ground surface rather

Lecture 2 Water Consumption - . water consumption. the consumption or use of water, also known as water demand, is the

Water ~ H 2 O - . some unusual properties. 1. water cohesive and adhesive. . cohesion - holding together of like