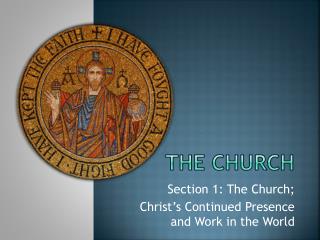 The Church. Section 1: The Church; Christ’s Continued Presence and Work in the World. Part 1: The Origin of the Church. The Church was always part of God’s plan, instituted by His Son, Jesus Christ, and given life by the Holy Spirit. LET THE CHURCH, BE THE CHURCH! - . what really is the church?. god only answers prayers that line up with his will! 1

The Church - Meadowhead christian fellowship. the church. what is the church. church comes from the greek: kuriakos -

THE CHURCH - . the problem with thomas becket. the church. stephen had granted concessions to the church, which had

The Church - . structure of the roman catholic church in 16 th c. the episcopacy. setup of church in eme. relationship

The Church - . part 4. the church the greek word for church means the called out ones ( ejkklhsiva ). called out from the

The Church - . sec 3. the church hierarchy. the medieval church had broad political power. it filled a leadership role in

THE CHURCH - . “church ”: a language lesson. kyriake (greek): belonging to the lord ekklesia (greek) :“those called

THE CHURCH - . what is the church? by harold harstvedt church - assembly - called out - congregation - a religious

The Church - . church, n. 1. a house consecrated to the worship of god, among christians; the lords house. this seems to