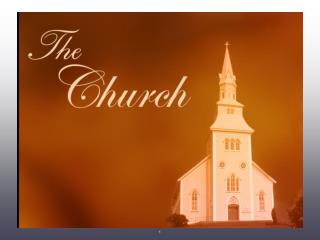 The Church. Part 4. The Church The Greek word for church means the called out ones ( ejkklhsiva ). Called out from the world: The collective body of Christians, or of those who profess to believe in Christ, and acknowledge him to be the Savior of mankind.

The Four Marks of the Church - . what does each of the words below mean? one holy catholic apostolic. the four marks of

We Have Four Essential Marks of the Church - . by: harrod chua 7f cn7. the 4 essential marks. the church is one. the

The Church - . “those who have been called together”. the church. a mystery – human and divine. the church. the

Life and Death &amp; the Church in the Middle Ages - . curriculum outcomes. 5.8 -identify the ideals which were

The Church: Saints and Angels - . greeting the saints. “to all god’s beloved in rome, who are called to be saints :

THE CHURCH - . recap last week. more than “ ecclesia ” not merely anyone gathered jesus had the church in mind jesus

The Church as Universal Sacrament of Salvation - . church as mystery. it shares in the life of christ it is an organism:

THE ESSENTIAL MARKS/TASKS OF THE CHURCH - . christ calls the church t be united as one. objectives. the lesson is ordered

Ecclesiology: The Church I. The Nature of the Church II. The Church Universal - Iii. the church local i. the nature of

In Search of Sanctuary - Once, the church on high street pulsated with activity: parents and children, dinners and