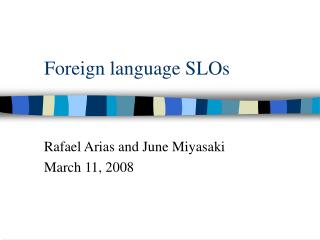 Foreign language SLOs. Rafael Arias and June Miyasaki March 11, 2008. The process. As of Spring 2008, the Foreign Language Department has developed Student Learning Outcomes for all of its courses. Foreign Language Courses - If you are interested in languages but don't have the desire to learn another one, a foreign

Teaching Foreign Language - Foreign language is one of the basic, core courses that most high school students need to

(Language) Foreign Phrases - Be sure your background or clipart is related to the page, sentence, or topic. (language)

HS Foreign Language Study - . you may already know how much foreign language proficiency your prospective colleges