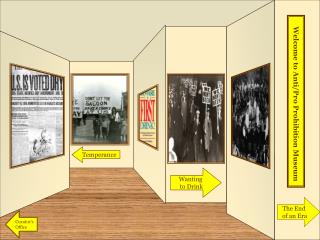 Welcome to Anti/Pro Prohibition Museum. Temperance. Wanting to Drink. The End of an Era. Curator’s Office. Laura Molini-Rohlfing. A U.S. History teacher that is very interested in the Roaring 20’s and the Prohibition Era. Also a VERY novice computer user. Insert your picture here. WANTING TO BELONG - . the power of social validation. belong. why is the behavior of others so compelling? why do we pay

To Drink or not to Drink? - . by lauren morris. about

Wanting to Be like Gods - . creation, providence and the problem of good and evil. those who have died have never left

Wanting to be Somewhere else - Thinking on the spot when the professor wants an answer… until…. wanting to be

What to Drink - . you’ll be thirsty from all that being awesome in ottawa. you’ve earned yourself a drink!. coffee. a

Water To Drink - . lesson 2. water quality. certain substances, such as ion, can affect the taste or color of water but

Water to Drink - . section 5 chapter 12. where does your drinking water come from?. cities/towns – public supply of

Sports Drinks, To Drink or not Drink

Wanting to Sell Your Used car? - Taking a good picture of your used car can help you sell it faster. read these tips to a

To Drink or Not to Drink: A Beginner’s Guide to Whiskey - Japanese whiskeys are known for their smooth, delicate, and

To Drink or Not to Drink? That Is the Question - . samer kanaan , m.d. goals. review briefly my credentials and

Wanting to Buy Modalert 200mg? Things to Know - Modalert is essentially a medicine for upgrading memory and treating rest

Drink to Your Health: - . the impact of your drinking water choice . by: rhonda jill noriega phd student walden

To Drink or Not to Drink? That Is the Question - . samer kanaan , m.d. goals. review briefly my credentials and

A Drop to Drink - . the economic case against policy prohibition of csp wet cooling. ben haley energy and environmental