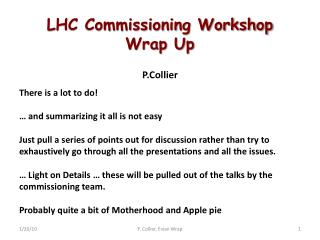 LHC Commissioning Workshop Wrap Up P.Collier. There is a lot to do! … and summarizing it all is not easy Just pull a series of points out for discussion rather than try to exhaustively go through all the presentations and all the issues.

June 11 th seminar and workshop wrap up - . the story beyond the june 2011 . james newell, mera ( monitoring and

Commissioning In Mississippi - . september 29, 2011. some preliminary stuff. i don’t speak “engineer” as well as i

Rechartering Your Scouting Unit - . a workshop for sam houston area council september 12, 2013. agenda. welcome what is