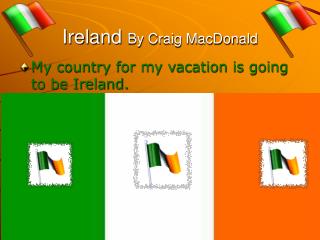 Ireland By Craig MacDonald. My country for my vacation is going to be Ireland. The Location of Ireland. The capital of Ireland is Dublin. It is located in western Europe and is an island in the North Atlantic Ocean. The Geography of Ireland. By Craig - Japan. by craig. 6 th class. food. for over 2000 years rice has been the most important food in japan here are

By Curtis MacDonald - Wolf dog my town. by curtis macdonald. rural area with farm land like wisconsin. the water features

By Mitchel Craig - Cad and cam. by mitchel craig. what is

Old MacDonald - . hello, my name’s mcdonald and i’m old. this is my farm. which animals can you see on my farm?. did

Anita MacDonald - Research bites. anita macdonald. home delivery of dietary products in pku and other imd. have you ever

Marley &amp; Scrooge By Kyal Macdonald - . similarities. businessmen they both knew each other. they went to school

Great Artwork By Craig Alan - Are you looking for the artwork by craig alan? connect contemporary brings a broad

Shannon MacDonald - . “in a world where the vast competition salivates behind every corner and the new school major is