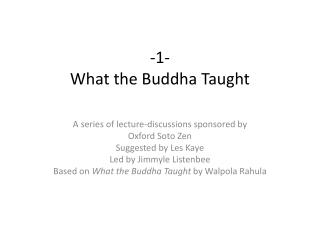 -1- What the Buddha Taught -1- What the Buddha Taught

Photo Composition - . ms. scales. rule of thirds. this is the first rule of photography that is taught and it is

Welcome to Bio 203 - . anatomy and physiology i mrs jamie zellers. a bit about me. bs from umd in biology ba from umd in

Co Teaching: Up Your Game - . literacy strategies for closing the gap in the co-taught classroom. ct4gc. today’s

Spirit-Anointed Teaching - . and they were astonished at his doctrine: for he taught them as one that had authority, and