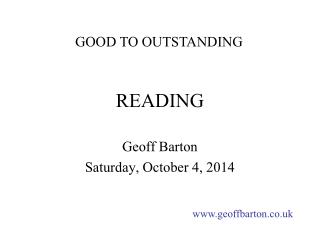 GOOD TO OUTSTANDING. READING. Geoff Barton Saturday, October 4, 2014. www.geoffbarton.co.uk. Effective reading is … A ctively taught Based on a rich variety of texts Rooted in reading for pleasure Not about analysis Always linked to writing. Reading Non-Fiction.