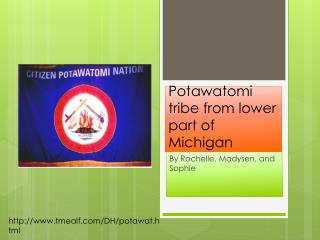 Potawatomi tribe from lower part of Michigan. By Rochelle, Madysen, and Sophie. http://www.tmealf.com/DH/potawat.html. How did they interact with other tribes?. The Potawatomi tribe were close allies with two tribes. The two tribes were: Ojibwa and Ottawa.

The Four Acceptable Methods for Thawing Food - . in a refrigerator, at 41  f (5  c) or lower. submerged under

The Olinka Tribe - . by: hannah weis. in relation to the book

Breaking Through the Zero Lower Bound - . miles kimball presentation at the federal reserve board november 1, 2013.

Topic Here Survivor - . can your team out-name of topic your opponents to win the title of topic survivor?. the six