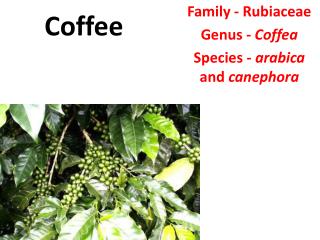 Coffee - . why do we need it?. the obvious reason of why we need coffee is of course for energy. so what do we really

Coffee - . para one. two words expressing time (in the 1600s) controversy : many doctors said… others insisted …

Coffee - . an afro-arab gift to the world. a powerpoint presentation. by richard w. franke professor of anthropology

Coffee - . &amp;. fairtrade. rwanda. we all enjoy a coffee when we’re out shopping. but when you buy a cappuccino

Coffee - . by: berlin westwood. process. the berry/beans are picked from large field locations with lots of sun. then