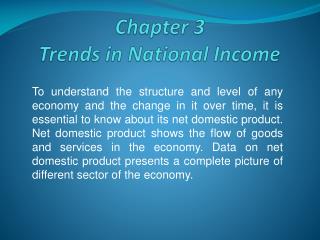 Chapter 7- National Income Accounting - . distribution of gdp. keeping tabs on the economy. recall: you must be able to

NATIONAL INCOME - . macroeconomics topic 1. what is national income?. ni is the value of all goods and services produced

National Income Accounting - . taking the temperature of the economy. gross domestic product. all final goods and

NATIONAL INCOME ACCOUNTING - . income and expenditure. what is income?. 1. income is the earnings of individuals.