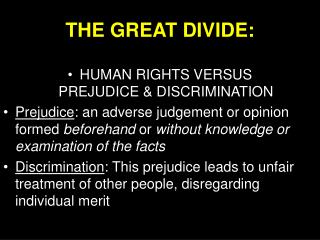 THE GREAT DIVIDE:. HUMAN RIGHTS VERSUS PREJUDICE & DISCRIMINATION Prejudice : an adverse judgement or opinion formed beforehand or without knowledge or examination of the facts

Across the Great Divide: - Building bridges for cross-generational management in libraries emily a. hicks 2008 nc serials 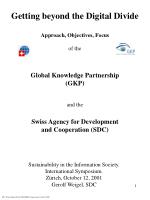 Getting beyond the Digital Divide Approach, Objectives, Focus of the - . global knowledge partnership (gkp) and the swiss

SCIENCE AND RELIGION: HOW GREAT IS THE DIVIDE? - . warfare thesis : throughout history, religion and science have been

Divide Fractions - . notes: divide fractions with models. means how many ’s are in ? so, i have 4 groups of 2!

Multiply and Divide by Exponents - Lesson 9: i can fluently multiply multi-digit whole numbers using the standard

The Great Schism The Christian Church splits - . the great schism (divide). - m ust not be viewed as the result of only