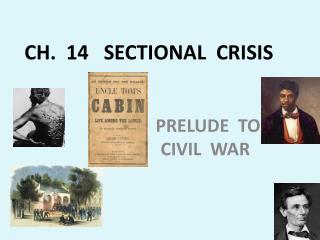 CH. 14 SECTIONAL CRISIS. PRELUDE TO CIVIL WAR. SEC. I COMPROMISE OF 1850. MEXICAN CESSION Issue of slavery not resolved by Constitution; so a problem each time territory is added to US a. N- land for small farmers; S – land for plantations/slavery