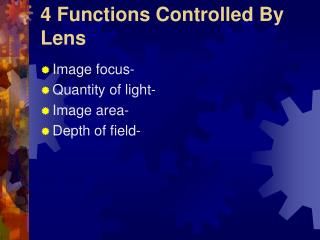 Controlled by the Japanese - . done by: kristy lee. what was life like under the japanese control ?. i t was a living

Functions 4-6 - . i can determine whether a relation is a function and find function values. s. calahan 2008. what is

4-3 Functions - . a relation is a function provided there is exactly one output for each input. it is not a

Section 4 - Functions - . all of the programs that we have studied so far have consisted of a single function, main()

Module #4: Functions - . section 2.3… functions. from calculus, you are familiar with the concept of a real-valued

Traits Controlled by Multiple Alleles - . means that there is more than 2 alleles that control a trait. (3 or more

Lens - A pinguecula is a white-yellow nodule (thick, blue arrows) at the medial and/or temporal limbus (corneoscleral

LENS - . it is a highly organized transparent spheroid structure that has evolved to perform refraction of the light