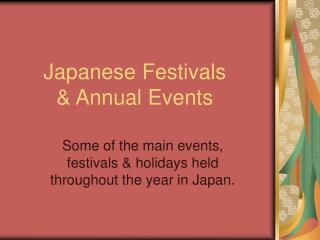 Unit1 Festivals around the world - . what kinds of festivals in china do you know about?. brainstorming. the double

Commissioner Lin Zexu burning opium at Humen - . signing of the treaty of nanking. the sino-japanese war: the battle

Learning Objectives - . summarize the japanese attack on pearl harbor. explain us and japanese strategy at the opening of

Internment of Japanese Americans - . one tragic consequence of the pearl harbor attack was a virulent anti-japanese

Japanese Literature - . haiku . blue can of steel what promise do you hold? salt flesh so ripe pink tender morsel

BRITISH HOLIDAYS AND FESTIVALS - . chapter 8. holidays and customs and their origins tell us what is important in a

Dependent Events and Statistical Fluctuations - . jonah: what is the combined effect of dependent events and statistical

Chiune (Sempo) Sugihara - . the story of a japanese rescuer and the people he saved. these japanese characters