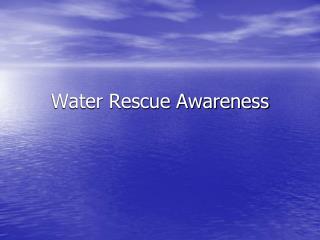 Water Rescue Awareness. King County in 2007 26 people drowned Most occurred in June and July- almost 30% of them in June. WA State in 2006 123 unintentional drowning deaths. Drowning is the second leading cause of unintentional death for Children ages 17 and younger. Some quick statistics. Water Rescue Awareness - . king county in 2006 31 people drowned of these 21 took place in open water most occurred in

Awareness and Operations Water Rescue Training Program - . the goals of this class:. identify what nfpa standards and

TRENCH RESCUE AWARENESS - . what is a trench?. o.s.h.a. defines a trench as excavations that are deeper than they are

Technical Rescue Awareness Program - . i like to call this trap training it is designed with all firefighters in the

Water Awareness - . water safety for rfes . always wear a properly fitting and secured pfd when within 10’ of water. no

Wilderness Search and Rescue Awareness - . the following power point training presentations must be viewed at unit