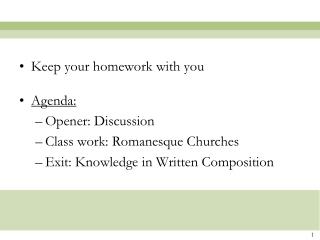 Keep your homework with you Agenda: Opener: Discussion Class work: Romanesque Churches Exit: Knowledge in Written Composition. Europe About 1100. Understand the term “Romanesque” in designating the artistic style of a historic period. 22 Aug - . opening instructions: as you walk in, take a seat in the front of the room (pay no attention to the pieces of

The Message to the Seven Churches a. To the Church in Ephesus (Revelation 2:1-7) - . as we go through this and the other

Opener - . what was going on in the world when everything went “modern”? 1. write down three social, historical, or

Things You Need: Packet from the front of the room Notebook paper Test Analysis Chart and Graph - Opener/agenda if you

What can we work out about medieval life from the Doom paintings that survive in churches today? - . medieval church-hell