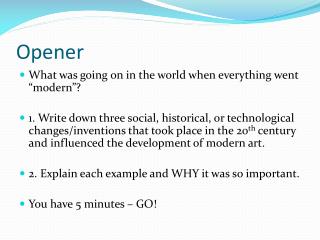 Opener. What was going on in the world when everything went “modern”? 1. Write down three social, historical, or technological changes/inventions that took place in the 20 th century and influenced the development of modern art. 2. Explain each example and WHY it was so important. Opener - . you have a slip of paper that is only half of an idea. you need to find the other half of your idea. as you

Opener - . the last word concerning virginia what types of people moved to va? what was their main economic activity? who

Opener - . in your binder start your first note page. the topic will be “the five purposes of art” remember during

Opener - . pick up handout out for today and update toc (table of contents) have homework out and ready for ms. callahan

Opener - Work together. use whiteboards. use laptops. opener. no opener today. use the resources on the internet and each

Opener: - . when you’re taking notes, if you have to write the same big word or words over and over again….do you

Opener - Work together. use whiteboards. use laptops. opener. complete the literature analysis from monday. use the

Opener - . give me instructions to make a peanut butter and jelly sandwich . use imperatives, or commands, if you can.

Opener - . king louis the xiv was nicknamed the sun king. how does this nickname relate to a huge palace like versailles

Opener - . if you could pick anywhere in the world to vacation, where would it be? explain your answer. space, the earth,

Opener - . please pick up the opener worksheet from the front of the classroom. answers. homework questions. notes: p.2.

Opener - . pick up a note packet from the side counter describe a force (what does it do? what is it?). newton’s 1 st

OPENER - . have you ever wondered why flamingos are pink or orange? you've probably heard it has something to do with

OPENER - . what conclusions can you draw from this war bond poster? what does the bloody knife represent? who is the