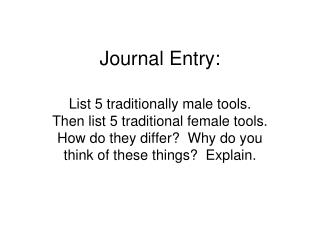 Journal Day 51: - . describe the event in your life which you can describe as the “most emotional time of my life.”

Beowfulf and Grendel - . unit 1: what is worth the effort?. informational journal entry rl.11-12.1 i can cite strong and

Introduction to double entry system - . 1.the need for book-keeping. 2. the accounting equation. 3. the double entry

Introduction to double entry system - . 1.the need for book-keeping. 2. the accounting equation. 3. the double entry

Journal Articles - . what is the very first section of a journal article, after the title, called?. abstract. what is the