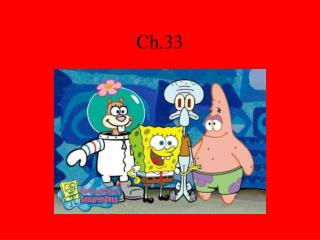 Ch.33. A. Sponges - New data suggests they were alive 635 million years ago! 1. Phylum Porifera: Sponges are sessile with porous bodies and choanocytes.  Sponges (phylum Porifera) are so sedentary that they were mistaken for plants by the early Greeks. CH 33 P2 - . 1) explain why farmers in the great plains were so deeply impacted and identify the group of farmers that

Ch. 33 ELECTRIC FIELDS - . and potential. fields and forces. a field is used to describe any quantity that has a value

CH. 27-33 TEST REVIEW - . this power point contains some of the people, events, and terms you should be familiar with.

Classification and ID, Ch 2, -33 - . with the trends toward globalization, and the “world getting smaller” a uniform

Ch 33 The Rise of the Roman Republic - . introduction patricians and plebeians under etruscan rule the patricians create

GROWTH RESPONSES AND BIOLOGICAL RHYTHMS IN PLANTS CH 33 - . tropisms orient plant growth toward or away from